Had the day off today so I decided to head off into the hills in search of an old mine site I’ve been interested in locating known as “The Devil’s Canyon Claims”.

I’ve poked and prodded a little around the area before, in search of the same thing, however that time my search was seriously hampered by snow on the ground and even more coming from the sky.

This time there was only traces of snow where before there was a solid foot, at least near the valley floor.

I headed up an abandoned road toward the Cougar Creek drainage which is where Devil’s Canyon lies.

The main road/trail hits a distinct fork not too far in, at this time it is marked by the remains of a campfire. The logical way is to continue along the more clear path, which is what I did. The other path, or abandoned road I should say, is very overgrown by scrub alder, and according to old maps, terminates some distance away, around the headwaters of Lennox Creek. 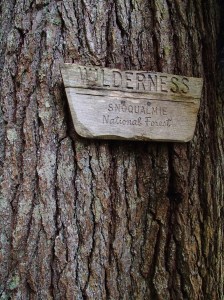 The road-less-overgrown steadily devolves into a trail the higher you get. I imagine there would be some views opening up around here, if today wasn’t socked in with clouds and a now light, but steady stream of snowflakes.

Seeing this I got excited, I love finding abandoned trails!

I followed it up and up, the snow steadily getting deeper, obscuring the already decaying trail.

Aside from the sheer curiosity of wondering where in the hell this trail was going, I oughta mention that there is a surprising abundance of old growth here that kept me heading up, kinda like a rabbit chasing a carrot on a string.

Eventually the snow became deep enough to completely eradicate any semblance of trail, and compounded with the lack of visibility and not quite knowing exactly where I was, I decided to turn around.

Getting home and consulting the internet, DWHM#1 and the USGS Lake Philippa 7.5, all the pieces came together.

So the trail turned out to be the abandoned Dog Mountain Trail, which passes near Devil’s Canyon, and down below most certainly was the Cougar Creek drainage.

Considering today’s conditions, it would have been a pretty tall order to find my quarry, however it was a day well spent nonetheless.

Multiple trips make an area far more familiar, and also I find, sort of help “gel” the spatial relationships in a set area together in the navigation/homing center of my brain.

I’ll be back later, when the snows have melted as there are far more mining sites to locate in and around this drainage.