“Cleveland” doesn’t immediately conjure images of serene alpine surroundings in my mind, rather football and meat packing for some reason. Regardless, it’s not a bad place to get away from it all…

…all that football and meat packing and such.

Back in the days of Ye Olde Northwest there once was a tiny town called Berlin. Nearby this little village, stood a mountain named for Grover Cleveland upon his election to the presidency. “Cleveland Mountain”

One day the Berlin postmaster let the cat out of the bag though, saying that the mountain would have been named for whomever won.

Ya know, “Loser Mountain” actually has kind of a nice ring to it too though!

I’m not sure how the lake took on the name, but I’m guessing it was a matter of proximity.

Interestingly, the outfall stream of Cleveland Lake is called “Happy Thought Creek”. Was perhaps this tiny Cascade lake once known as Happy Thought Lake before being glossed over in a patriotic fervor?

I dunno, but I like “Happy Thought Lake” better.

Things change, names change. I mean hell, even Berlin is now called Miller River. Yep, the town was so inflamed with anti-German sentiment when WWI broke out, that they changed the name!

Is Miller River still full of seething anti-German rage? Probably not, but then why haven’t they changed the name back to Berlin? Willst du meine briefmarkensammlung sehen? What in the hell am I even talking about anymore?! Let’s get to the hiking…

From the mountain hamlet of Miller River, head west on Money Creek Road. Just after the cabins and Mountain McMansions there is a bridge crossing Money Creek. A logging road veers left just before the bridge. This is the “trailhead”.

Some vehicles may be able to drive some distance down this road before it becomes impassable, but use at your own peril.

From whatever point you end up leaving your car, you’ll be in for a lot of logging road hiking. It’s about 5 miles up to the road’s end from Money Creek Bridge. However far you are able to drive up chips away at that total. (…and your paint job! )

This road grade is in pretty good shape for an old log road, and was clear of serious obstacles most of the way up. (July 2017)

Towards the top of the road you may be able to find a faint trail leading up into the woods. It doesn’t last long, so you’ll be needing some off trail skills to get to the lake.

It’s about a mile of underbrush, downed trees and steep duff to get to the tranquil waters. Think Happy Thoughts! 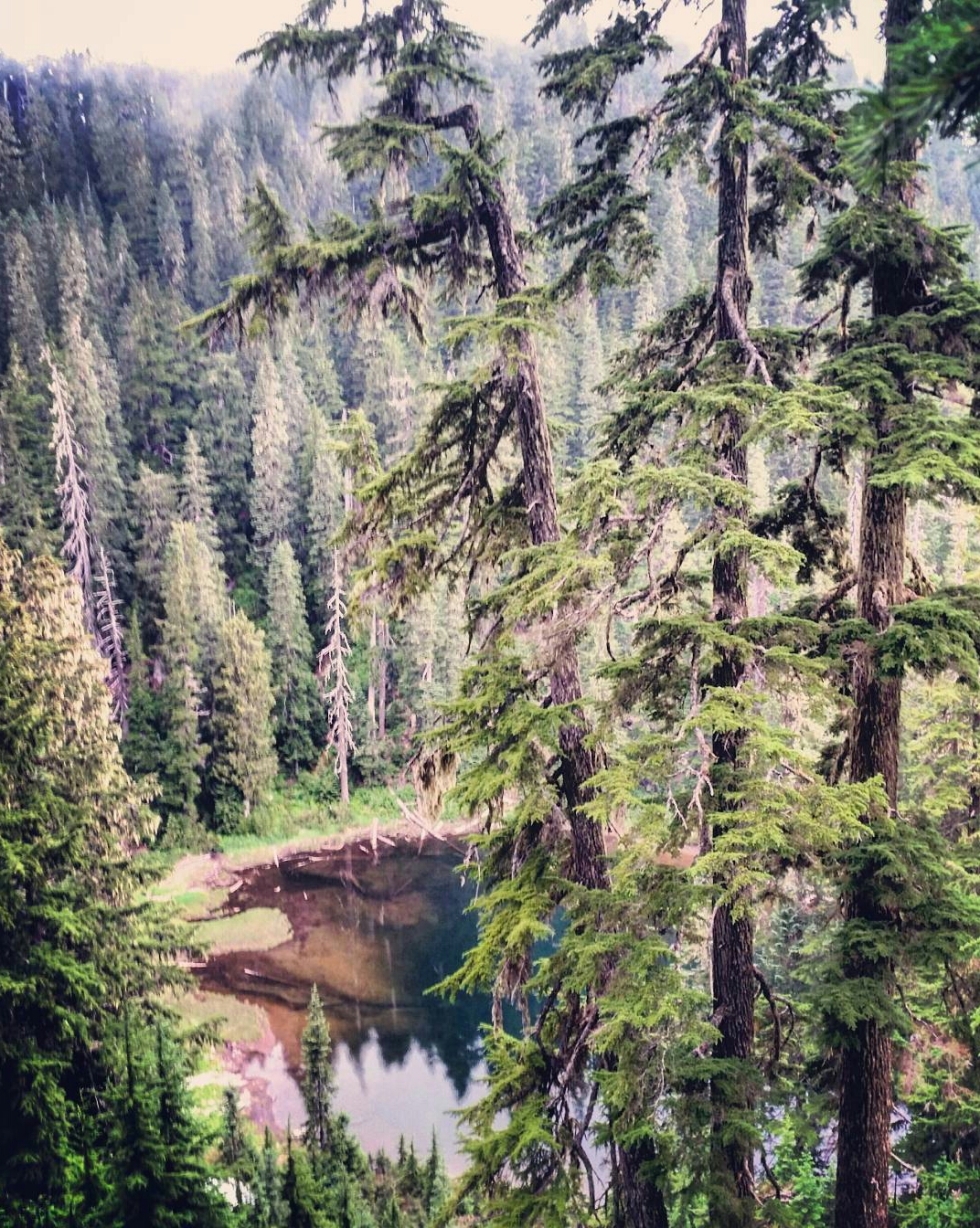 There didn’t seem to be any established tent sites at this offbeat little pond, which is good. If you stay, stay lightly.

The occasional bellow of the freight trains chugging through the Skykomish valley below sometimes sound across these still waters, perhaps lending a sort of vague old timey nostalgia to this idyllic mountain oasis. IMHO!

At first glance I guessed that Happy Thought Lake was barren, however further investigation revealed that there were a few cutthroats around. (July 2017)

The lake isn’t difficult to circumnavigate, offering a lot of casting space and perspectives on the tiny lake basin. Cleveland Lake, er, Happy Thought Lake resides within Forest Service lands, as does the “trailhead”, so you’ll be wanting a NW Forest Pass for parking.