After getting all spun out on that case of Gravity Bullseye Monster I got in Fat Bike Diaries #1, I had a compulsion to take the bike to the desert, I dunno, maybe kinda like a Jim Morrison thing but without the drugs… well mostly.

So I drove out to an area near Wanapum marked as “dunes” on the map. I parked at a wide pull off and rode down a dirt road, breaking off at an old, sandy motorcycle scar which led in the direction of the dunes.

The stretch of sand was stitched together with sage and tumbleweed, but had some open runs to ride. The sun was setting on the diminutive dunes, casting mystically purple shadows.

This is exactly why I wanted to visit the desert!

Near the edge of the wind blown sands, I began to follow a set of tracks. It could have been a spirit animal or something, but was probably just a normal deer.

The tracks wove gently between the clumps of grass and shrub and continued down into a draw, the golden grains splashed pink with dwindling sunrays.

I feel like maybe I should have followed the footprints, but I didn’t. Maybe I was getting a little antsy; the sound of motorcycles vaguely in the distance was kind of giving me a Mad Max meets Deliverance vibe, I’ll admit.

That night I camped at Frenchman Coulee. During the evening I was surprised to see a tall, basalt spire inexplicably illuminated against the night sky.

First thing in the morning I drove back to George to grab a cup of coffee and something deep fried for breakfast.

Jo-jo’s: The Breakfast of champions

From there I drove out to the Quincy Lakes recreation area. The morning was a little chilly, and the parking lot was completely deserted… my steering wheel was greasy with JoJo juice.

The sunrise over Quincy Lake was warming. The sun rays felt good on my face as I tossed pebbles onto the thin ice covering the shallows. 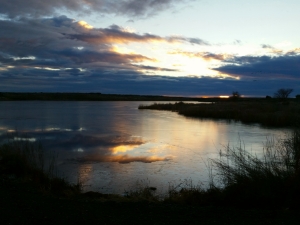 I’d seen a mine symbol on my map just above Judith Pool, so I took a northwest course toward “H” Lake following paths of various quality to make my way.

The mine was a shallow hole cut into some very fractured and unstable material. I saw a few odd bluish specks of mineral, but had no idea what they were mining here.

From the mine I went a little further along the path to an overlook of Judith Pool and the Ancient Lakes.

On the way back I followed a different path, which turned out to be a much more direct route to the main Quincy Lakes Road.

When I got to the Dusty Lake Trail I decided I needed to do some more exploring so I carried my bike down the steep trail and was able to ride to a good overlook of El Lago Dusty.

From there trails wound through the dry grass leading me around the various lakes and ponds. Trails became faint or non existent in places only to reappear in others.

Glad I got my quantum physics badge back in the scouts!

Aiming myself in the direction of the road eventually got me there, which led back to the parking lot, which was still empty.

I took a minute to reflect on what everybody else was missing out on. Then was saddened when I realized all the great stuff I might be missing out on…

Welp, back to Shree’s Truck Stop at George for more coffee and deep fried wedges of startchy delight! Least I won’t miss out on cardiovascular disease.

The sun was high by the time I had returned to Frenchman Coulee.

I rode out towards a big sand dune south of the road leading down to the boat launch.

The sandy trail was a good test for the 4″ tires, and they did well! I had no trouble reaching the dunes on the massive tread.

The big dune is piled against a basalt cliff like the bridge of a nose. From just about where the nostril tops would be it fans out widely. It really bears no semblance to a face, or a nose at all, however.

A pair of trail runners appeared upon the enormous sandy pile shortly after my arrival. One of the two made a Rocky-esque ascent of the tallest part of the gritty behemoth, at the top, she even raised her fists in triumph.

I waved and smiled and whispered to myself through my teeth “gawdammit, I was gonna do that!”

The guy looked over toward me and totally didn’t yell “Yeah?! Well you snooze, you lose bike boy!” but it would have been really funny if he did.

They stretched and checked all their watches, and phones and sandy plugs, and merrily ambled off into the horizon. Now it was MY turn to climb the granular golem! It’s steeper than it looks!

From the dune I noticed a faint trail leading up to a narrow notch that led onto the cliffs. I followed it up, carrying the bike part of the way. At the top I continued eastward.

A faint trail was traceable, though often obscured by dried overgrowth. When I finally lost the trail, I contoured the hills, continuing east.

The bike does surprisingly well across the dried grassland of the plateau! Like riding an alloy mule!

I found my way to an ATV road, which literally ended in a lake. Across the water I could see the other side of the road. Oh yeah, ford it!? That didn’t always work out so good on the Oregon Trail if I remember correctly!

I rode the alloy mule around the pond instead, and happened upon a much newer looking road, which I followed. Didn’t take long to see it was heading in my direction.

The road ended up popping out at the top of the Frenchman Coulee road, from which point I triumphantly coasted down to the wide bench which overlooks the waterfall.

A trail winds narrowly along the cliffs down to the falls, it’s uneven and rocky, with a nasty plunge if you really screwed the pooch. I enjoyed having the extra wide tires on this thin track!

At the falls I took time for climbing around and taking pictures. I even discovered a riding lawn mower lodged between some rocks and the cascading waters. Maybe best not to top off the water bottle here. 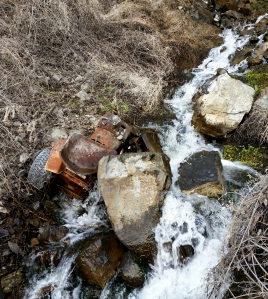 From there a sandy trail led away into the sage. The grainy grade gives way to a rough and rocky surface in lockstep with the descent of the roadway above.

This rocky old jeep trail eventually gets close enough to the Coulee road that I was able to hop off, preferring the sun baked asphalt.

The car was parked only a short, smooth ride away.

While it was only 6.5mi, I gotta say, it felt like a lot more in the best way.

Now the call of hot truck stop coffee was taking me back to George before the long haul back to Sea Town. Better grab some Jo Jo’s while I’m at it. They are kind of a local delicacy…

Still here? I’ll be damned. Welp, might as well hunker down then and read Fat Bike Diaries #3