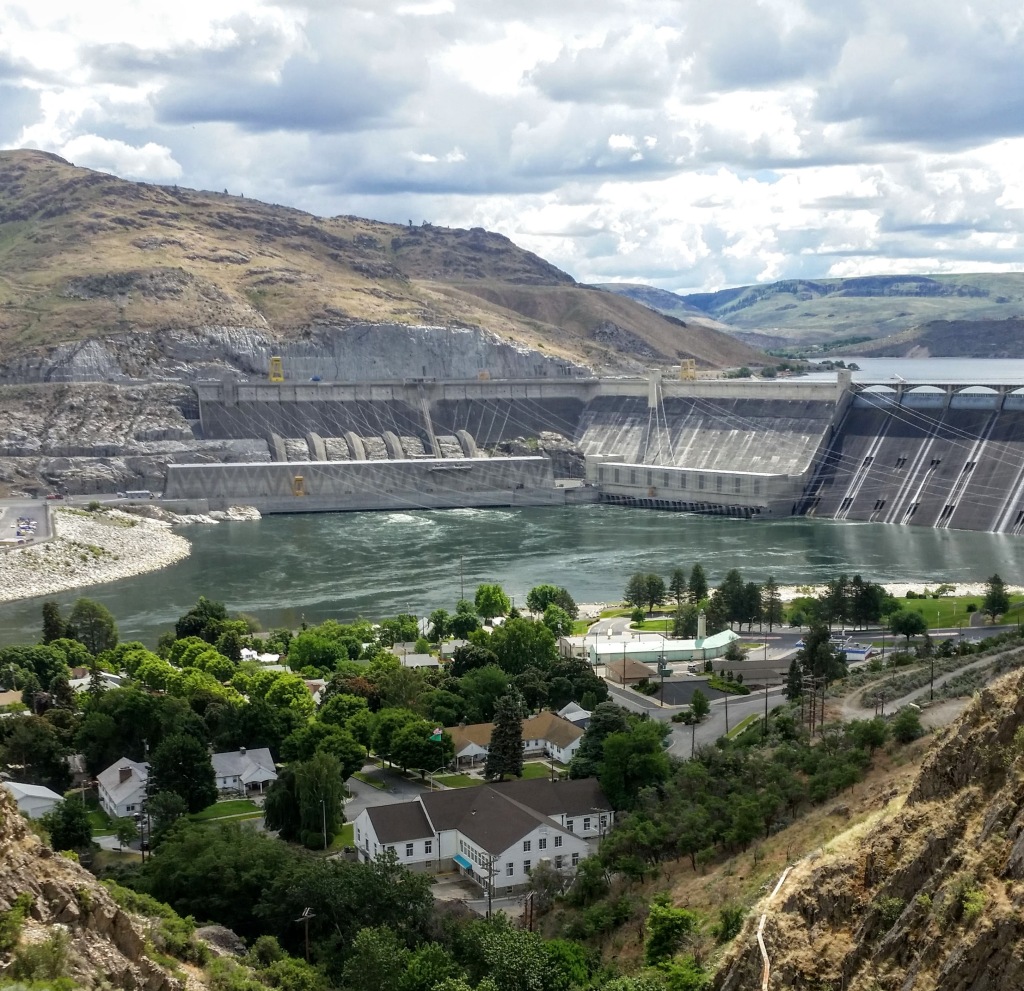 This short but steep hike in Coulee Dam, WA leads to some of the best views to be had of the most powerful hydroelectric generating station in North America. 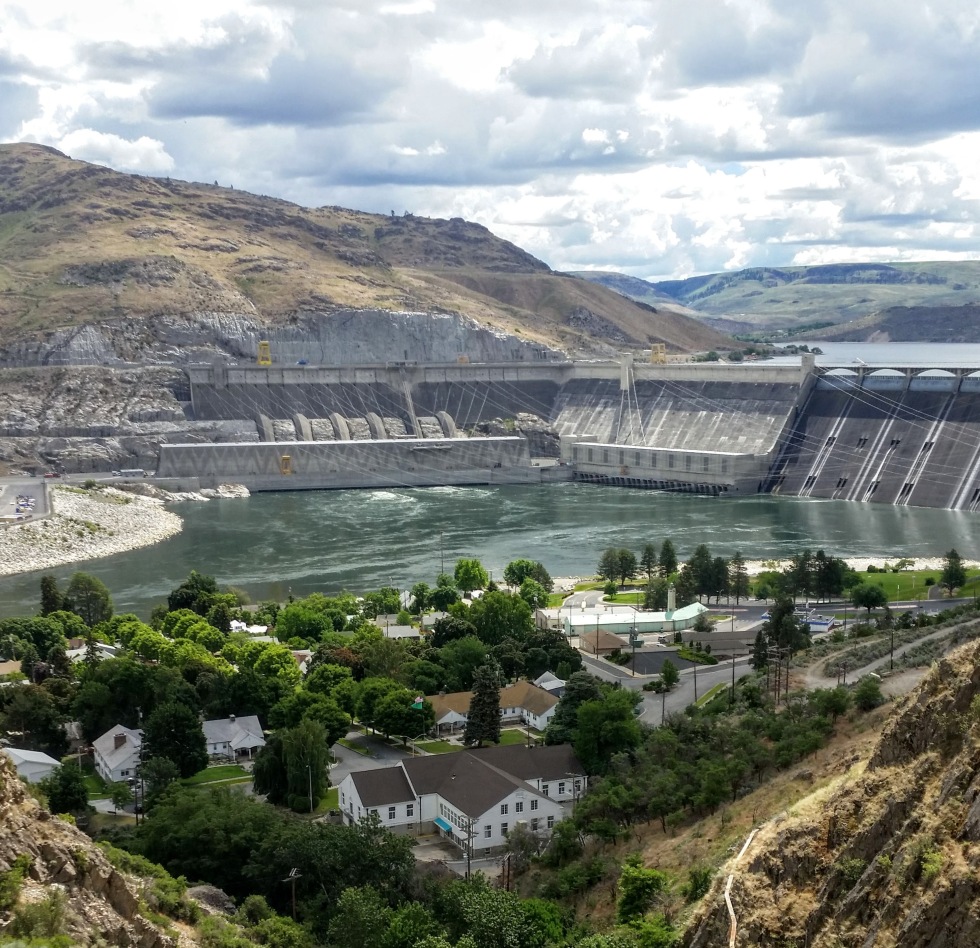 Work began on the Grand Coulee Dam in 1933 as part of President Franklin Roosevelt’s “New Deal”.

In 1937 the Civilian Conservation Corps, or CCC, constructed the trail to the Candy Point Top to provide views of the massive dam, which was completed in 1942.

In 1991, the trail was rebuilt through the efforts of the Grand Coulee Dam Rotary Club.

Some 26 years later, in 2017, Washington Trail Association volunteers repaired sections of the trail, and cleared overgrowth from the 80 year old grade. 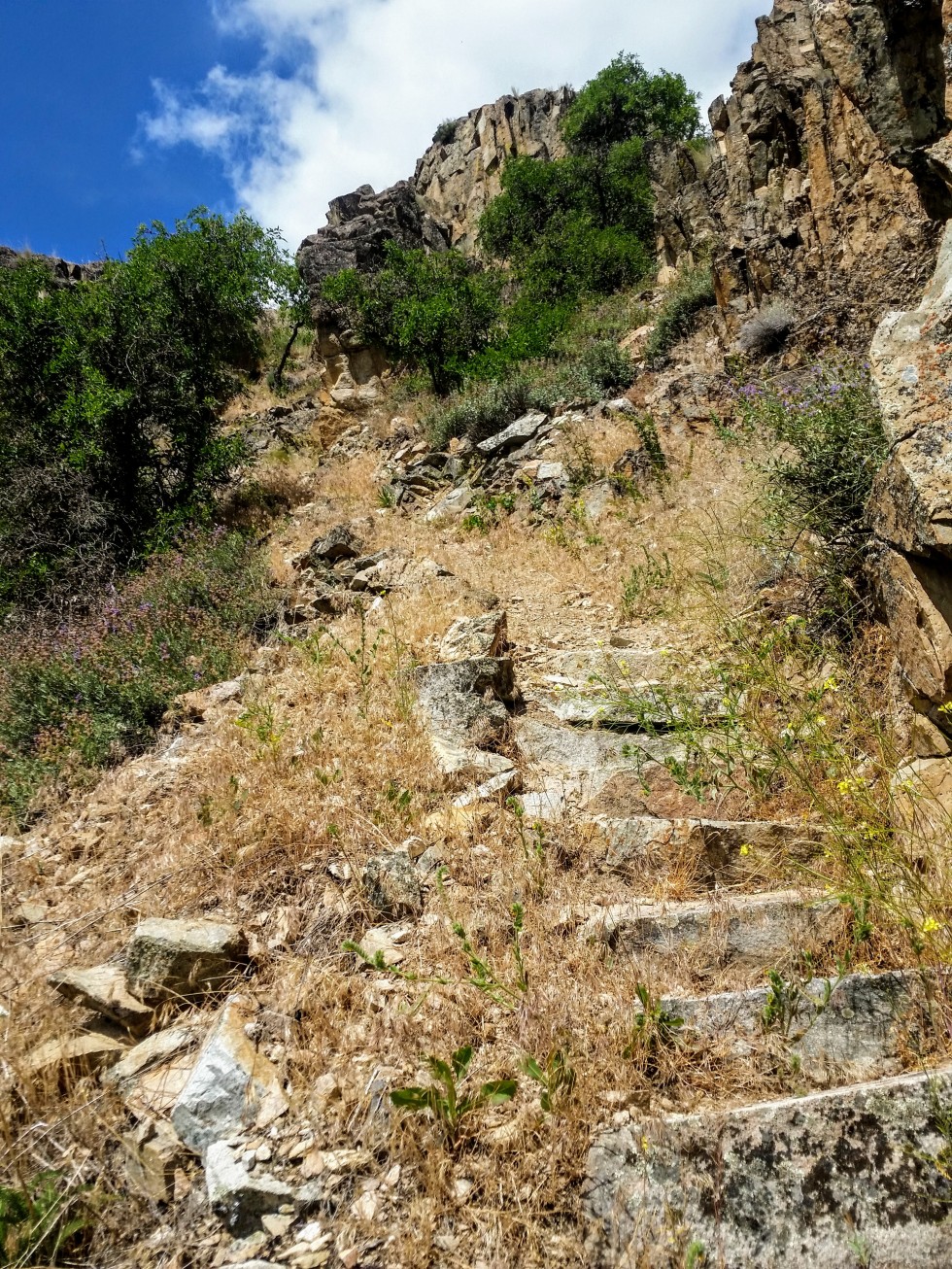 I can’t think of many other trails that offer as much as the Candy Point Trail in such a short distance; Nature, history and some great views of a legitimate world wonder.

One of them is along North Columbia Ave, and appears as a sign in someone’s yard. From there you walk across their lawn (I know it sounds weird, but they’re cool with it) to gain access to the trail.

The other is behind city hall at the top of Douglas Ave. Initially I thought this boot path was going to lead me to a hobo encampment or a teenage pot smoking spot, but no, this is the trail…

…or the real one is a short distance away in the same parking lot, I dunno.

This is the way I hiked it. 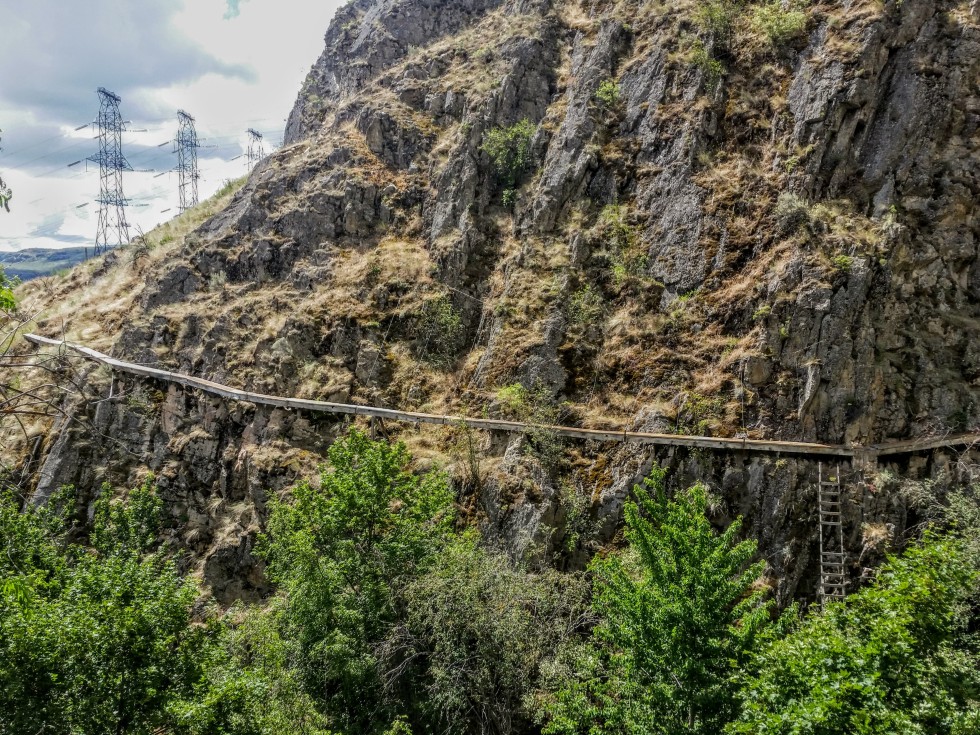 From behind City Hall: Follow a bootpath dipping into a brushy draw behind the parking lot. A makeshift bridge of rock and debris sometimes span diminutive Fiddle Creek which lies at the bottom of the draw.

The path then begins to head up, passing by a fenced off railroad tunnel, which a plaque describes was abandoned before it was ever even used.

The trail continues up the Fiddle Creek draw, in many places up well constructed rock steps placed by the CCC so many years ago.

Looking back as you gain, the mammoth concrete impoundment creates a surreal backdrop over the picturesque Grand Coulee old town.

From here one can fully appreciate the town’s placement as more than just a show of trust, perhaps rather trust defined.

At what seems like the top, the trail begins snaking up the grassy backside of the 1765′ point. Oh, that reminds me… 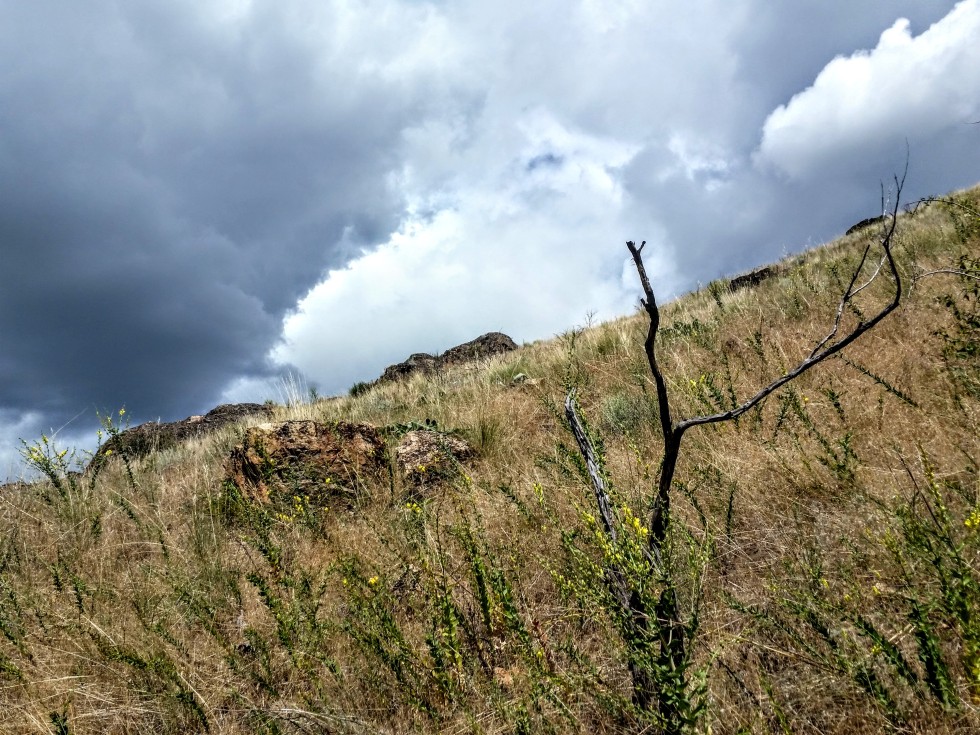 This is rattlesnake country!

Keep an eye and ear out for snakes!

Around the Candy Point top is the remains of some sort of radio equipment, and an eyeful of views of the damn big dam.

A spur trail in this area also leads over to the parking area at the Crown Point overlook to the north.

The route then begins to travel down a draw sloping to the north east, steeply traveling downward upon the CCC’s well built grade.

At the bottom you’ll find yourself in someone’s yard; “I dunno man, you sure it’s cool to cross here? I ain’t trying to get shot after avoiding all the cliffs and snakes, I worked too hard for this!”

Prepare your best “but teh internetz sed it wuz k” face, then cross the grass to the road. You might even see the sign over there. (No really, they’re cool with it!”)

You’re now on North Columbia Ave, follow it south, past the bank and into Cole Park. There, a much better bridge spans Fiddle Creek and will put you on a long, diagonal sidewalk back up to City Hall where you parked.

…or turn around and do it the other way, the world is your oyster! 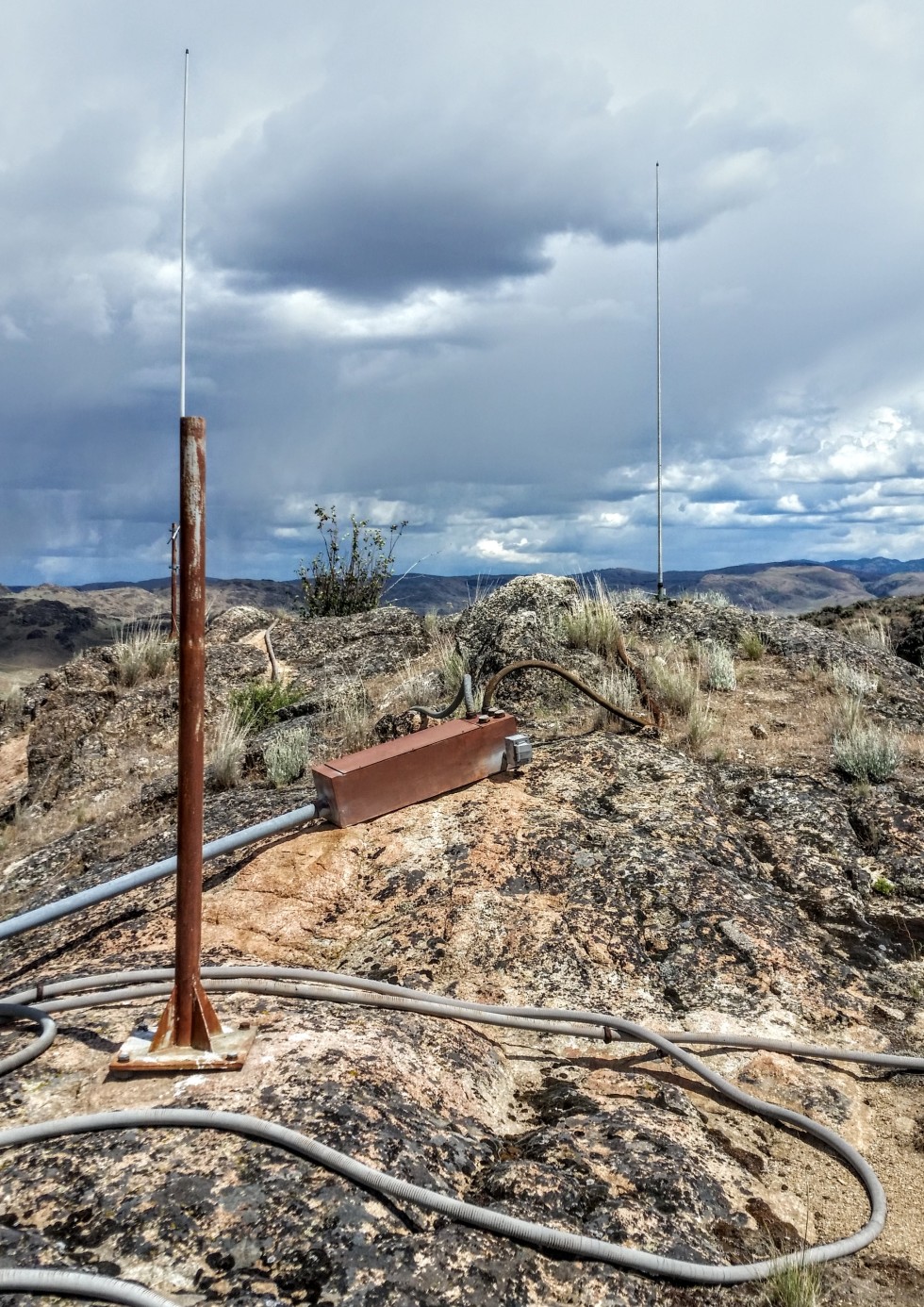 Step one is to get yourself to Coulee Dam, WA, which you’ll find in the north central part of the state.

Step two is to pick your trailhead. There’s some parking up at City Hall at the top of Douglas Ave, or street parking on North Columbia Ave.

If you’ve crossed the bridge to the north side of town, you’re on the wrong side of the river.